Classical Archives is thrilled and honored to present this exclusive interview with pianist Jean-Efflam Bavouzet, one of the brightest stars in classical music today. M. Bavouzet and Barry Lenson, Editor-in-Chief of Classical Archives, enjoyed a most lively and informative conversation that we invite you to enjoy.

Jean-Efflam Bavouzet’s 11-CD Chandos recording of all 65 of Franz Josef Haydn’s piano sonatas has been creating a major stir in the world of classical music. In BBC’s Classical Music Magazine, Bayan Northcott wrote a rave review of disk 11 of the set. And then the classical music world got even more excited when in the New York Times, music critic David Allen wrote a feature article about Mr. Bavouzet and his astonishing recording.

This level of excitement usually surrounds the release of a new recording of Wagner’s Ring operas or Berlioz’s les Troyens. Why is all this exhilaration swirling around recordings of Haydn piano sonatas, most of which have usually been classified as underpowered pieces that should, at best, be used to open recitals of weightier works that will follow? It is because Mr. Bavouzet, thanks to his 13-year exploration of these pieces, reveals new levels of depth that have been overlooked in the past. In these recordings, even the simplest and shortest Haydn sonata seems to announce, “Look at me, I have something new and important to say.” And the bigger, weightier Haydn sonatas clamber up to take their deserved place alongside the “bigger” sonatas by Mozart, Beethoven and possibly even Schubert.

This is history being made, and we are proud to be a small part of it. 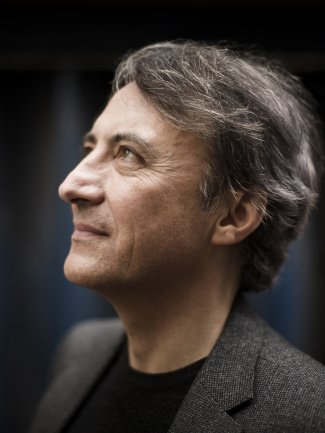 Highlights of the 2022/23 season include Sydney Symphony, Tokyo Metropolitan Symphony, Prague Radio orchestras, Orchestre Philharmonique de Marseille, Budapest Festival Orchestra, and Orquestra Sinfônica do Estado de São Paulo. He returns to Seattle Symphony Orchestra for a play-direct programme of Hadyn, Beethoven, and Mozart, and performs with Orchestre Philharmonique de Strasbourg at the Bishwiller Festival. He continues his relationship with Manchester Camerata and Gabor Takács-Nagy which will include a tour of the Baltics. With Takács-Nagy, Bavouzet also performs Mozart concertos with Orchestre de Chambre de Geneva and the Janáček Philharmonic Orchestra.

In recital, Bavouzet continues his three-year residency at the Wigmore Hall, titled ​‘Autour de Debussy’, which includes solo recitals and a chamber concert with the Orsino Ensemble. Bavouzet and the Orsino Ensemble also perform at the Helsinki Seriös chamber music series. Other recitals include two Debussy programmes at the Ferrara Musica Festival, Sydney City Recital Hall, and Sala São Paulo to name a few.