Opera Joe McKesson Interviews Gail R. Gordon of Numi Opera about Journey Out of Darkness in Santa Monica on May 29

Numi Opera will present Journey Out of Darkness, a concert of opera arias on Sunday, May 27th at 7:00 PM at The Broad Stage,1310 11th Street in Santa Monica, California 90401. Tickets are $50 and $35 for students and seniors. For more information or to purchase tickets, visit www.NumiOpera.org

Journey Out of Darkness is an ambitious program dedicated to breathing new life into works by composers such as Korngold, Schrecker, Schulhoff, Ullman, Weil and Zemlinsky, who suffered oppression under fascist regimes.

Performers will include soprano Shana Blake Hill, tenor Scott Ramsay and baritone Roberto Perlas Gómez with the Melodia Mariposa string quartet and the Alameda String Quartet under the musical direction of Christopher Luthi.

In our video, Opera Joe McKesson talks with Gail R. Gordon, Executive Director of Numi Opera, about Out of Darkness, about Numi Opera, and more!

Numi Opera Theatre is back live after the Covid shutdown and will present, Journey Out of Darkness, on Sunday May 29, 2022, at 7:00pm at the Broad Stage 1310 11th Street in Santa Monica.

The concert features a collection of works by composers suppressed by fascist regimes of the 20th Century. The evening’s composers include Korngold, Schrecker, Schulhoff, Ullman, Weil and Zemlinsky.

The arias will be sung by acclaimed singers soprano Shana Blake Hill, tenor Scott Ramsay, and baritone Roberto Perlas Gómez; Christopher Luthi acts as Music Director and Gail Gordon continues in her role as Founding Director of the company. The concert will also feature string quartets Melodia Mariposa, led by Irina Voloshina of LA Opera and LA Phil, and The Alameda String Quartet led by Adam Millstein of Colburn School.

Tickets for Journey Out of Darkness are now on sale at NumiOpera.org.

Numi Opera Theatre was founded to bring modern relevance and excellence in performance to recovered works, and to shed light on the artistic value of composers exiled or killed during the Nazi regime, as well as other fascist regimes. This concert is particularly poignant considering the current spread of suppressive nationalist ideas as well as the conflict between Russia and Ukraine.

Gordon said, “Numi’s vision is that the restoration of this suppressed art to the repertoire is essential to the formation of a more comprehensive societal identity. Through our non-profit work we intend to keep this music alive for future generations so that we Never Forget.”

The Numi Opera’s Inaugural Season was launched in May 2019 with Alexander Zemlinsky’s rarely performed Der Zwerg based on a story by Oscar Wilde; the company was hailed by Opera Wire as “a welcome addition to LA’s opera scene.” The following December, the Numi Opera production of Erich Korngold’s first opera Der Ring Des Polykrates was deemed “a revelation” by the Los Angeles Times.

Conceived by Founding Director Gail Gordon, Numi Opera is a company inspired by her desire to stage recovered and lesser known works like the company’s debut productions. Many of these works not only share a connection to Los Angeles but also share the fate of having been suppressed and banned by the Nazi regime due to the Jewish Heritage of the composers. Ms. Gordon, the child of Jewish Immigrants, feels deeply that the neglect of works of art such as these due to Nazi suppression, or suppression under other fascist regimes, over the greater portion of a century must be rectified in order to heal a portion of the many injustices perpetrated on the underrepresented and oppressed throughout music history.

The name Numi was chosen to evoke the Italian meaning of “the gods” or “the heavens” as in Verdi’s Aida when the divine spirit is invoked by a Priestess for the protection of Egypt, or appealed to by Aida for mercy “Numi, pieta.”

It also is meant to recall the term “Numinous” or “many.” Ms. Gordon’s hope is that Numi Opera will guard and protect the many forgotten voices of opera, reaching through the barriers of time and space to reanimate their creative forces so that they may return victorious to the stage and to the repertoire.

Gail R. Gordon, Founding Director of Numi Opera, began producing operas in 2000 with her first company, Opera Nova, which she founded to give young singers an opportunity to perform standard repertoire. She went on to lead the Santa Monica College Opera Theater in 2008. Ms. Gordon has produced many traditional operas from the master works of Mozart, Puccini, Verdi and Bizet. In addition she was responsible for the acclaimed West Coast Premiere of Tobias Picker’s An American Tragedy. In producing this epic work that had only previously been heard at The Metropolitan Opera, Ms. Gordon discovered that there was a real desire from the Los Angeles public to experience new and lesser known works. She carries this spirit of discovery forward with Numi Opera. 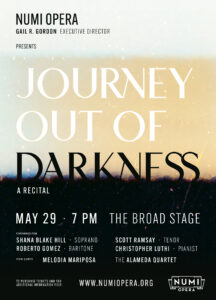