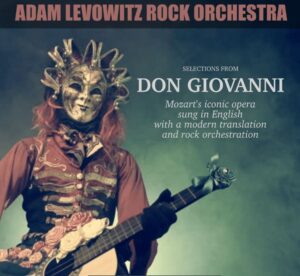 Some years ago I saw a rock version of Monteverdi’s Inoronazione di Poppea that was just great. The producers simply let a rock band play what Monteverdi wrote – with no modifications at all, except for the addition of a drum set. The performers sang it in English. And that really worked.

That was extremely cool. But now, something even cooler seems to be coming our way. A highly innovative musician/producer named Adam Levowitz is taking a similar, modernizing approach to make Mozart’s Don Giovanni into a rock opera. Don Giovanni, we think you will agree, is a pretty cool opera in the first place. So we predict that Mr. Levowitz’s new kind of Don Giovanni will make the opera doubly cool – and increase its appeal to a younger demographic.  It too will be performed in English, and by an extremely attractive cast of singers. Even the instrumentalists in Adam Levowitz’s Rock Orchestra are a hot-looking crew too.

While we are waiting for the first performances to happen, you can even preorder the new recording now.